Historically, Test and Tag Regulation differed across all states of Australia, Western Australia included. These older regulations allowed WA to adhere their own unique system of testing frequencies and test tag colours.

This is not the case anymore. WA has now aligned with all the other Australian states to follow the same system of testing and tagging.

It’s not uncommon to sometimes still see people still abiding by the older regulations, so it’s important to be aware of what the exact requirements are under the current system. We explain everything you need to know about the standards, test tag colours, and testing frequencies for WA below.

The AS/NZS 3760 and 3012 Standards are the two main standards must that you must work in accordance with to test and tag in WA.

The 3760 standard encompasses the overarching regulations for test and tag, whereas the 3012 standard refers specifically to testing and tagging construction, demolition, marine or mining sites.

If you will be working in Construction, Mining or Demolition industry you will need to adhere to the AS/NZS 3012 Standard, and that means you will be required to use certain Test Tag Colours. These colours are used to indicate which quarter of the year the testing has been conducted in. 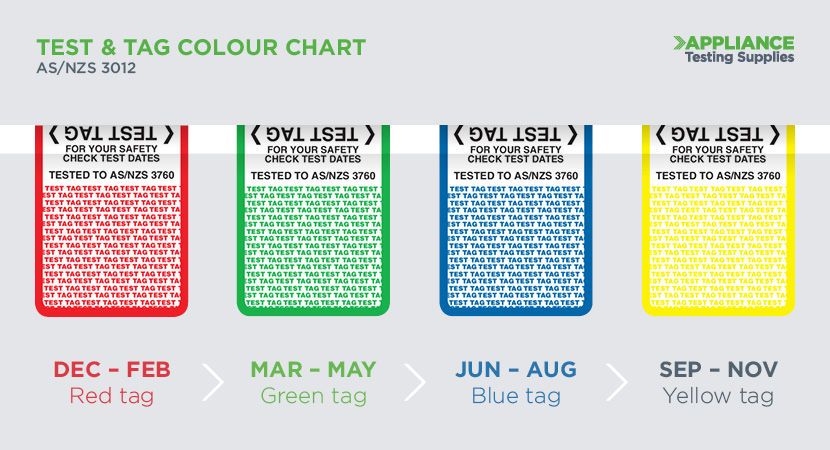 Testing Intervals are also another standard requirement. Interval lengths are mostly dependant on the type of environment an electrical appliance is in. We generally recommend the following frequencies:

It is important to make sure you work with the relevant standards and adhere to any individual company OHS or risk management policies, as they may require different testing frequencies.

If you have any particular questions about the AS/NZS 3760 and 3012 Standards, or general questions about testing and tagging in WA please feel free to contact our office. You can also undertake test and tag training to learn everything you need to know, with courses run in multiple locations across Western Australia.

If you enjoyed this article, make sure you sign up to our newsletter to receive expert advice straight to your inbox.

We are always happy to answer any questions you may have.

Send Us an Email

Trustpilot
Sign up to our free newsletter to receive all the latest offers, industry news and expert advice.